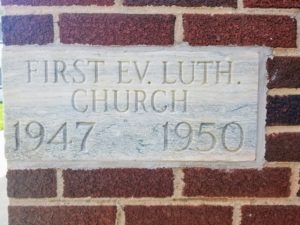 In 1942, the Spirit of God was at work even before our church was formed. The Depression was over, work abounding, however, few people had cars to take them out of the small community of Gray Manor.

The first services and Sunday School was held in a small U.S.O. building on Parkwood Road. On Good Friday 1943, even before the street was completed, services moved to the remodeled farm house at 212 Oakwood Road, our current location. On February 2, 1947, 40 persons signed the church charter thus forming First Lutheran Church of Gray Manor. These 40 persons had passed, however, our current congregation consists of some of their 2nd, 3rd and 4th generations. On January 29, 1950, ground was broken for the first unit of our church. About 90% of the work was donated by members and friends of the congregation. The Dedication was held on Sunday, April 29, 1951.

“In the beginning was the Word, The Word was with God, and the Word was God, he was with God in the Beginning” John 1:1,2. And so it was, is and will be forever.

We are a church centered on the unique Gospel of Jesus Christ, animated by missions and evangelism, grounded in the 2,000 year tradition of Christian faith, and organized chiefly to serve our congregations.

We confess the apostolic faith in Jesus Christ according to the Holy Scriptures. We affirm the authority of the Scriptures as the authoritative source and norm, “according to which all doctrines should and must be judged” (Formula of Concord). We accept the ecumenical creeds and the Lutheran Confessions as true witnesses to the Word of God.

We affirm the ecumenical creeds and the faithful witness of the Church across time and space. We endorse the form and practices of the universal Church that are consistent with Scripture, particularly the office of the ministry and the tradition of worship under Word and Sacrament. We seek dialogue and fellowship with other Lutheran churches and with faithful Christians of other confessions.

We strive to be a church that is organized to facilitate the ministries of local congregations in a posture of servant-hood and a spirit of partnership, through the provision of resources, connections and information.

Jesus Christ as Lord and Savior and the Gospel as the power of God for the salvation of all who believe.

The Apostles’, Nicene, and Athanasian Creeds as true declarations of the faith of the Church.

The other confessional writings in the Book of Concord, namely, the Apology of the Augsburg Confession, the Smalcald Articles and the Treatise, the Small Catechism, the Large Catechism, and the Formula of Concord, as further valid interpretations of the faith of the Church.

The Gospel, recorded in the Holy Scriptures and confessed in the ecumenical creeds and Lutheran confessional writings, as the power of God to create and sustain the Church for God’s mission in the world.

First Evangelical Lutheran Church of Gray Manor honors and accepts The Common Confession (2005) as a summary of teachings otherwise affirmed in the Lutheran Confessions.